“It was never a question of, you know, did I want to do this — it just felt natural. I knew I had a responsibility to help continue the family legacy.” 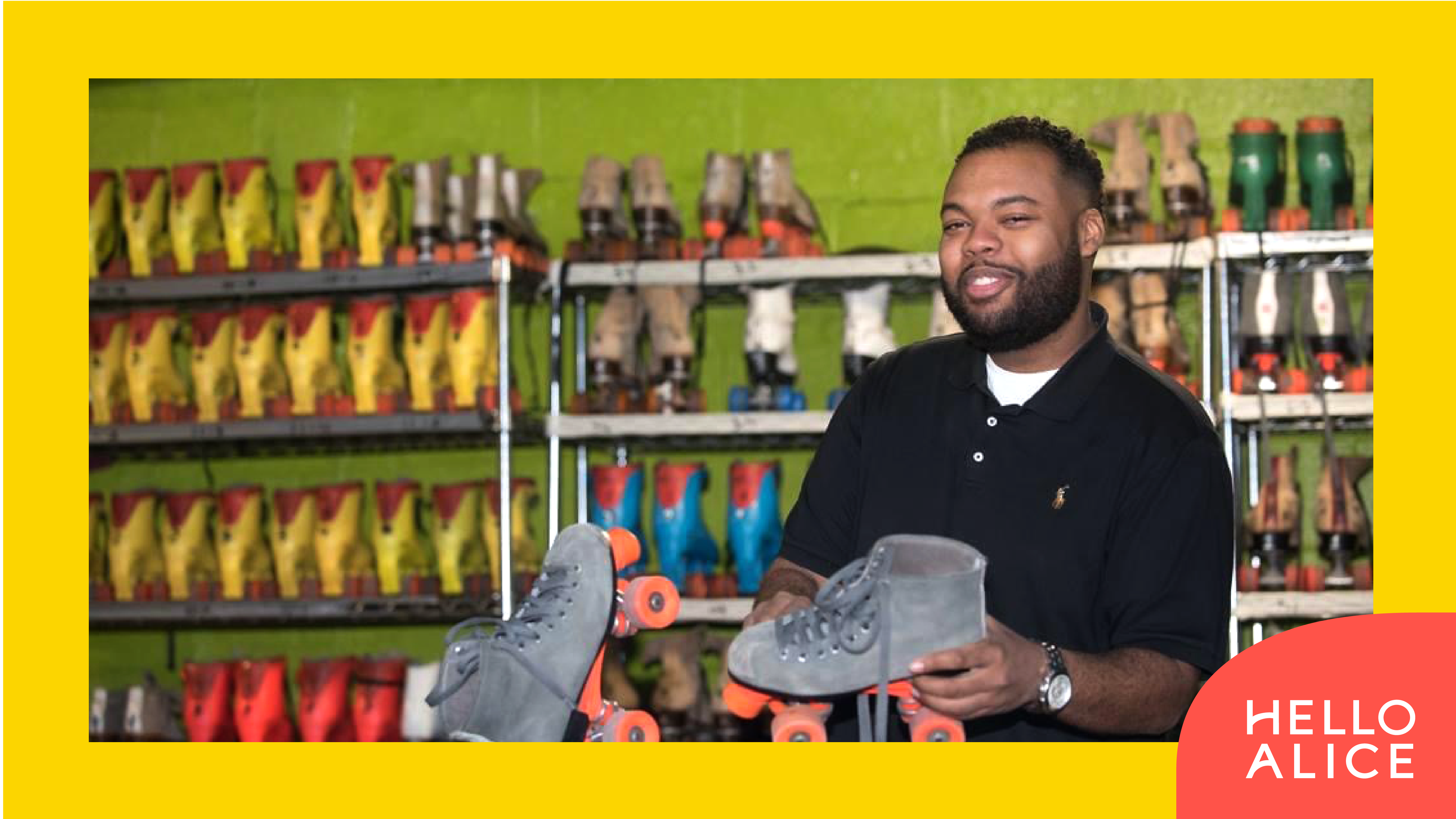 Established in 1955 by Leroy Folks and Johnnie Mae Folks, RollerCade is a Detroit tradition. The roller rink opened at the height of segregation as one of the only places where a Black person could skate in the city and built a reputation as a community hub for all ages. Throughout the decades, customers have included everyone from big names like The Supremes, The Temptations, and Bow Wow to neighborhood kids celebrating their birthdays. Kyle Black took over as the third-generation owner in 2012.

Hello Alice caught up with Black to discuss RollerCade’s long history, his entrepreneurial journey that started at age 20, and what’s next for the 66-year-old small business. What follows are his own words, lightly edited for length and clarity.

My grandmother and grandfather were originally from Alabama, and they moved to Detroit in hopes of getting to a place that was a little bit safer for Black people. Granddad found a job in the Ford Rouge plant, and my grandmother was a home wife. Soon they saved up some money, and granddad was able to get financing through the bank at his job. Just for African Americans to get a commercial business loan at that time — it was unheard of. He kept on working at the plant, so it was my grandmother who actually started her own business. At first, they weren’t sure exactly what they wanted to do with the loan, so they asked their kids. All three said a skating rink. So they built the building in 1954, and they started RollerCade in 1955.

Everybody in the family has had their time working at the rink. My uncle passed ownership to me in 2012, and I’ve been running it since I was 20 years old. For me, it was never a question of, you know, did I want to do this — it just felt natural. I knew I had a responsibility to help continue the family legacy. I had a job to do.

Most of my business knowledge came from just being part of the business as a kid. If you grew up and you see somebody doing bookkeeping every night as you’re waiting to go home, your curiosity kicks in. What are you doing? Why are you writing these numbers down? What is this night deposit bag for the bank? Why do you go to this place every day to buy supplies? A lot of stuff I just picked up from being around the business as a kid, and then I did go to college at Wayne State to pick up some more technical skills.

It’s still been hard. I had a situation early on when we had a bad storm come through. I didn’t have insurance at the time, and a sign fell down. At first, I went to the bank and asked about financing, but they said the $6,000 or so that I needed was too small of a request for them to handle. I didn’t really have another option. I’d only been an adult for a couple years. How was I supposed to develop credit? So not being able to receive capital made us extremely diligent in saving our money. We became self-sufficient, knowing that we had to have a certain amount of cash liquid, just in case something went wrong with the sign, or the floors, or the roof. In the long run, that may have helped us.

I’ve been running RollerCade now for nine years, and I would say the biggest change is the demographic of people who get to enjoy the rink. It’s no longer just the immediate radius of the building. People come from all over, all different races, all different ages, all different locations to enjoy RollerCade. We’ve never advertised much. Everything that we did was pretty much word of mouth and then trying to please one person at a time. Our goal has always been to have you come to the rink and make you the happiest person in the world; we just tried to take care of every single person who came in.

When COVID hit, we really didn’t know how long this was going to last, but we had an online store. Then skating TikTok became the biggest thing in the world because we were stuck in the house. Suddenly everybody wanted to own a pair of skates. We ended up selling a lot all the way up until our manufacturer was out of inventory. In my eyes, it’s all about being flexible. Even though we’re a 66-year-old roller rink, we still have the flexibility to do something new.

Another unique thing that I’ve done involved direct mailers. You see, in Michigan, in the summertime, this skating business has always been relatively slow because people were enjoying the sunshine while they had it. So what I did a few summers ago was print out about 10,000 discount tickets for the slower months, which would be June, July, and August. Then I put my employees on roller skates, and we would skate up to people’s houses and give away these discount tickets at the beginning of the summer. It allowed people to come skate at a discounted rate, just to convince people that, hey, you can still come indoors in the summertime. Once the people get in the building and enjoy themselves, it’s not hard to get them back. Through that direct mail marketing campaign, I was able to completely change the culture of summertime and make it very, very lucrative for us. There’s no reason something has to be the way it is. Even though summer has been slow for 60 years, there has to be a way for people to enjoy skating all year long.

Getting to know my customers has to be my biggest tip. I like to greet every customer and have that conversation. I’m able to adjust to the customer’s needs because there’s no chain of commands, per se — I don’t have to get it approved or run it by anyone. I can listen directly to the customers and analyze what they want.

Part of that is about giving back, too. I say that when you support RollerCade, you’re supporting the whole neighborhood. One of our biggest events every year was our Back to School Party. It would be a free skating night, and we would give out free haircuts, book bags full of school supplies, free food — just to give kids a sense of confidence going into the first day of school. That’s something that we did every year from when I started in 2012, all the way up until COVID. We take care of people who take care of us. We try to make it go in a circle.

Over the years, my family acquired the remaining lots surrounding the building. Now we own the whole block. So the goal is to build an entirely new skating rink. A lot of people say, ‘Why would you tear this down?’ And I understand why people say that, but I’m looking to the future, which is 66 more years of RollerCade. How can we benefit even more people? We need a larger building, a more up-to-date building to keep it going in a better way.